What better way to start the festive season than with a visit to see the big jolly man himself! This year we decided to go and see him while he stopped by at the Cbeebies Land Hotel. We had visited the CBeebies Land theme park back in the Spring and absolutely loved it. We were really eager to go to the hotel when it opened!

We booked the Santa Sleepover package, which included entry to the CBeebies theme park, entry to the Alton Towers waterpark, breakfast and dinner and entry to see Jack and the Beanstalk.

When you arrive at hotel – which has such a fun and colourful entrance – it made me happy and smiley so I can only imagine how a toddler might feel! You are greeted instantly by staff who are really helpful and friendly. We all like to feel a little bit special when we go on a trip and the staff here really did that. 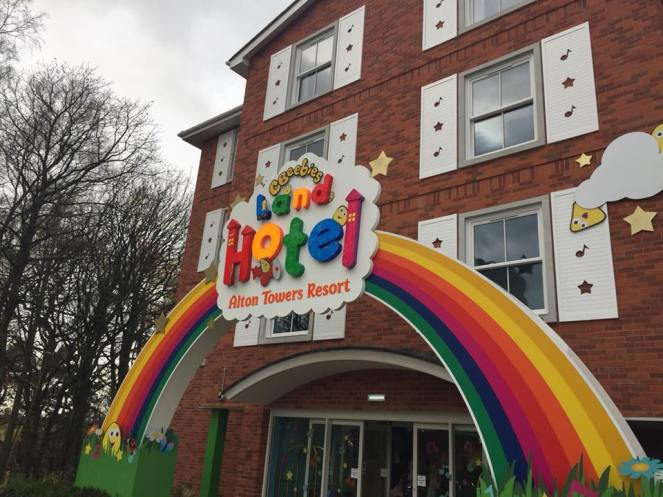 As we had left early, we decided to head to the Windmill Restaurant for breakfast. There was a huge selection of fruit, cereals, smoothies, yoghurts and a hot selection of sausages, tomatoes, eggs, bacon and toast. There is cutlery for toddlers (in the CBeebies colours!) and the plates are CBeebies themed. The quality was really good – as far as buffet breakfasts go!

After breakfast, we headed next door to the conference centre to see Jack and the Beanstalk. This was really funny. Lots of jokes for kids and quite a few for the parents too! The ‘ Partridge in a Pear Tree’ song by the pantomime baddy and his sidekick was hilarious! Finley sat memorised through the hour long performance which was amazing!

We then got the shuttle bus to the CBeebies park. There was a bit of a wait for this which wasn’t ideal getting a toddler to stand still in the cold. However, we did eventually get there! Being November, the park was quiet so it was very nice not having to queue! We were able to go on rides 3 – 4 times which Finley loved. His favourite was the Octonauts rides, closely followed by Justin’s House – although I think Daddy may have enjoyed this more than Finley!

The Little Explorers Lunchbox cafe serves hot and cold sandwiches, baked potatoes and offers free Heinz baby food which is great. Unfortunately for us, Finley is a lover of chips and as they are promoting healthy eating they aren’t served here. They do have a nicely stocked salad bar which we opted for for him. Me and Stuart just had hot chocolate which was very nice.

Then to see Santa! Everyone had an allocated time slot, so no queueing in the cold. When we arrived at the grotto, a very happy and friendly elf greeted us and took Finley by the hand leading him through a beautiful tree lined path lit with fairy lights. We came to a lodge and knocked the door. A big ‘HoHoHo!’ and we opened the door to a gorgeous, jolly, fat, white bearded Santa! He was just lovely, He chatted to Finley for a good 5 minutes. It was very un-rushed, which I have felt a little sometimes with other Santa visits I have been on. Finley could then pick a toy from the workshop. He decided to pick an Elf (which he has named Finley!) 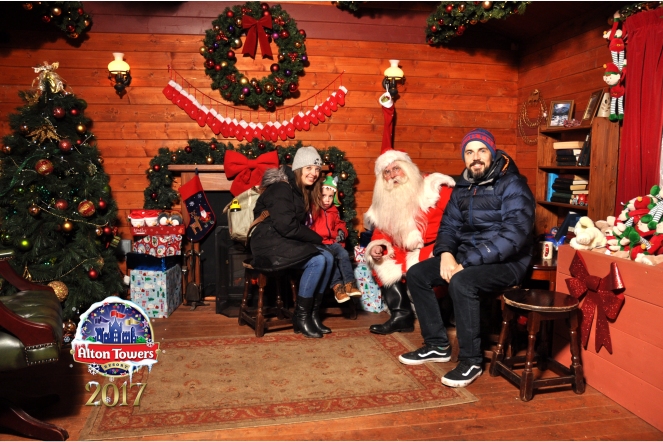 After saying goodbye to Santa, we headed back to the hotel. There is entertainment on all day, including meet and greets with all the main CBeebies characters, gameshows like Swashbuckle that you can play along to, kids discos and musical instruments to play along to. There is a bar area facing the entertainment area, so parents can sit and have a drink while the little one’s are being entertained. It was great. The character costumes are really authentic. Finley absolutley loves meeting characters like this so this was a real treat for him.

The themed rooms are brilliant. We stayed in the Bugbies themed room (you can also stay in a Something Special themed room, Postman Pat, Octonauts, plus many more.) There is a bunkbed that sleeps up to 3 children with a television opposite, a bathroom stocked with kids toiletries and a toddler insert on the toilet and a double bed also with a television. Complimentary tea and coffee and cookies are also available.

We weren’t hugely impressed with the dinner options. I chose the fish pie which was tiny  and Stuart had the braised beef which looked a little unappetising. Finley had the sausages (which he has also had breakfast!) but there was nothing else on the menu that he would have liked. Again the lack of beige freezer food with chips was a bit challenging for us! Finley is very much a chicken nuggets kind of kid! They did have a selection of cocktails though which pleased me greatly!

There was entertainment and a Christmas disco on in the evening including another visit from Santa but we were all really tired by this point so decided to call it a day.

On the second day we visited with Alton Towers waterpark. The changing rooms would have benefitted from a few more family changing rooms. We had to squeeze into a double as there was no bigger rooms available. But other than that, the waterpark is really great. There is loads to do, toddler areas and an area to climb up with a mini assault course towards the top.

The CBeebies Santa Sleepover is a little on the pricey side – our package was £250 which is more than we usually spend to see Santa! However, I think it’s really good value for what is included. Apart from the evening meal which was a little poor, everything else was fantastic. And the main thing of course is that Finley absolutely loved it! The look on his face meeting his favourite CBeebies characters and when we went into our hotel room is something I will never forget.

We have already said we want to do it again next year – we better start saving!

More information on the CBeebies hotel and CBeebies Land can be found at their website – www.cbeebiesland.com

View all posts by yammymommyblog